Surf session with the following surfers: the Portuguese Alex Botelho and Nuno Santos, the brasilian Eric Rebiere, the German Sebastian Steudtner and the Spanish Axi Muniain. 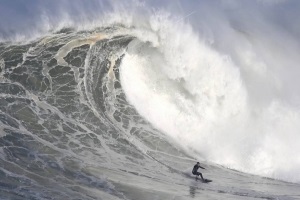 The winter season 2015/2016 is over, but Nazaré continues to offer big waves! Yesterday, April 11, a big swell came and the North Beach offered us waves around 12 meters.

Several surfers entered the water and offered a beautiful battle between the Wave and the Man! The session was held between 8am and 11 am. It was not an easy day for Paddle! Alex Botelho caught some waves but broke his board! Sebastian Steudtner and Axi Muniain were more active in the Tow-in. The wind, gusting above 20nós, made it hard, but surfers have taken over several waves.

Remain aware to the forecasts because, although we are "officially" off-season of big waves, nature can always surprise us. With climate change and increased occurrence of storms in the Atlantic, the bigger waves could arise at any time.

Check the photos of this session, that joins the beauty of nature and bravery of the man!

NOTE: be aware of the XXL Awards, which take place on 23 April. (Information in the previous post)

(The pictures in this surf session are below)