It does not require much attention to notice the many frustrations related to the existing photo interpretation method of estimating XXL waves. The internet is full of stories describing scandals, measurement errors, and politics regarding the use of photo interpretation to determine wave size. The efforts used to estimate breaking wave height over the past few decades have provided a giant step closer to measuring true wave heights. But, unlike in the decades past, technology now exists to provide purely objective wave height measurement that produces a set of data points from a sensor, not from a photograph. The need for an evaluation panel of “experts” has been replaced by a drone and altimeter sensor. Moreover, real time wave height measurement (results in seconds) has replaced the months to years analysis lag time from the past. 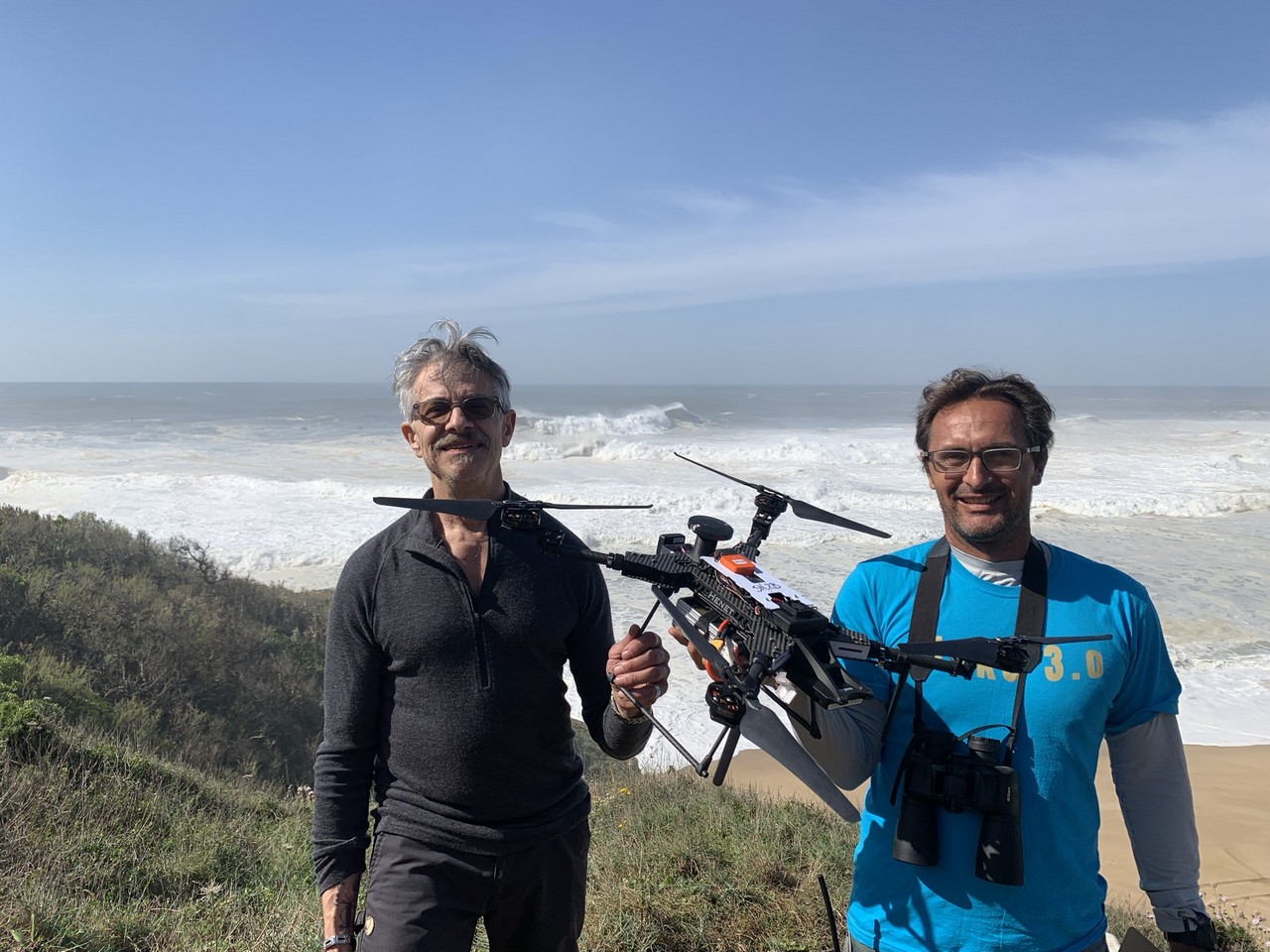 The inadequacy of current subjective photo interpretation standards motivated the development of the Henet aerial buoy system. Henet, the ancient Egyptian word for pelican, is a company dedicated to providing unbiased and purely objective real time wave height measurements (not estimates) in the surf zone for waves as small as 1ft and as big as you can imagine. Wave period and wave energy are also some of the other parameters that the aerial buoy can calculate. The aerial buoy system is patent pending technology that uses a drone mounted network including a sophisticated GPS monitor and a high resolution altimeter to calculate the actual wave height from individual troughs and peaks of a wave. A time series of information from multiple waves can then be produced from a single drone flight. 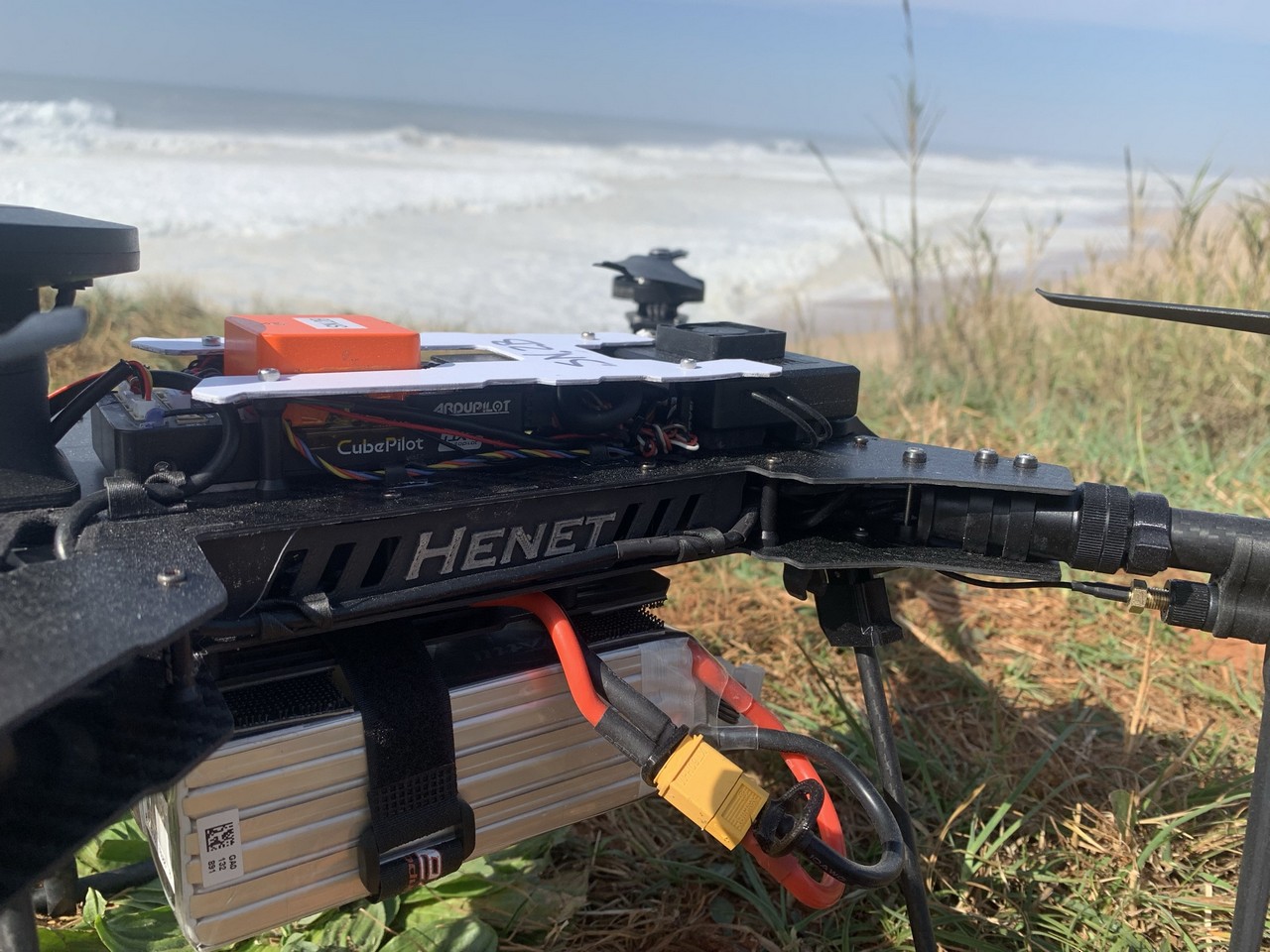 We reached out to Andrew “Cotty” Cotton during our research and development phase to ask if he would consider to provide feedback to improve our work and to accelerate our progress. To us he was an obvious choice for a collaborator: passionate, knowledgeable, articulate, and motivated. Cotty’s support was invaluable during the development phase and continues to guide our operational approach. After months of research and prototype development, along with a few failures, a test version was ready to fly during the historic swell in Nazare on Feb 25th 2022.

A team of three arrived in Nazare one day before the swell to prepare for the big waves the following day. We met with Cotty and he explained the break in detail and suggested where the best places to launch would be. The rest of the day was spent scouting locations along the cliff looking for potentially uncrowded spots with a direct line of sight to the break. While everything had been going exactly to plan by this point, we ended up suffering a major disappointment on our first night. Our battery charger broke.

We had intended to fly throughout the entire day, but now with limited battery supply, we were only able to fly during the morning hours. While this setback didn’t necessarily ruin our plans, it did compromise the amount of time we had planned to measure waves. Rather than producing 8-10 hours of data, we could only produce 2 hours. I was gutted because I knew there would be some potentially huge waves breaking out there. I wasn’t wrong.

We awoke on the morning of the swell to witness massive waves that were forecast to build throughout the morning and into the early afternoon. After loading up our gear, we arrived at our location by the lighthouse and began to set up. Cotty had given us an extra walkie-talkie so we could communicate directly with him and monitor his team’s movements so that we could position the drone above them during their waves. The most difficult aspect of our operations was managing drone placement at the right place on the wave, but this became less of an issue by the end of the trip. Despite having limited battery supplies, we managed to conduct 4 flights of 30 minutes each. The data captured a 70.87ft wave during the morning hours. Most waves were between 40 - 50ft. Cotty confirmed these measurements based on his observations while out in the water. He guessed that most waves were in the 40 – 50 ft range with a few larger sets. His experience was positively correlated with our data! 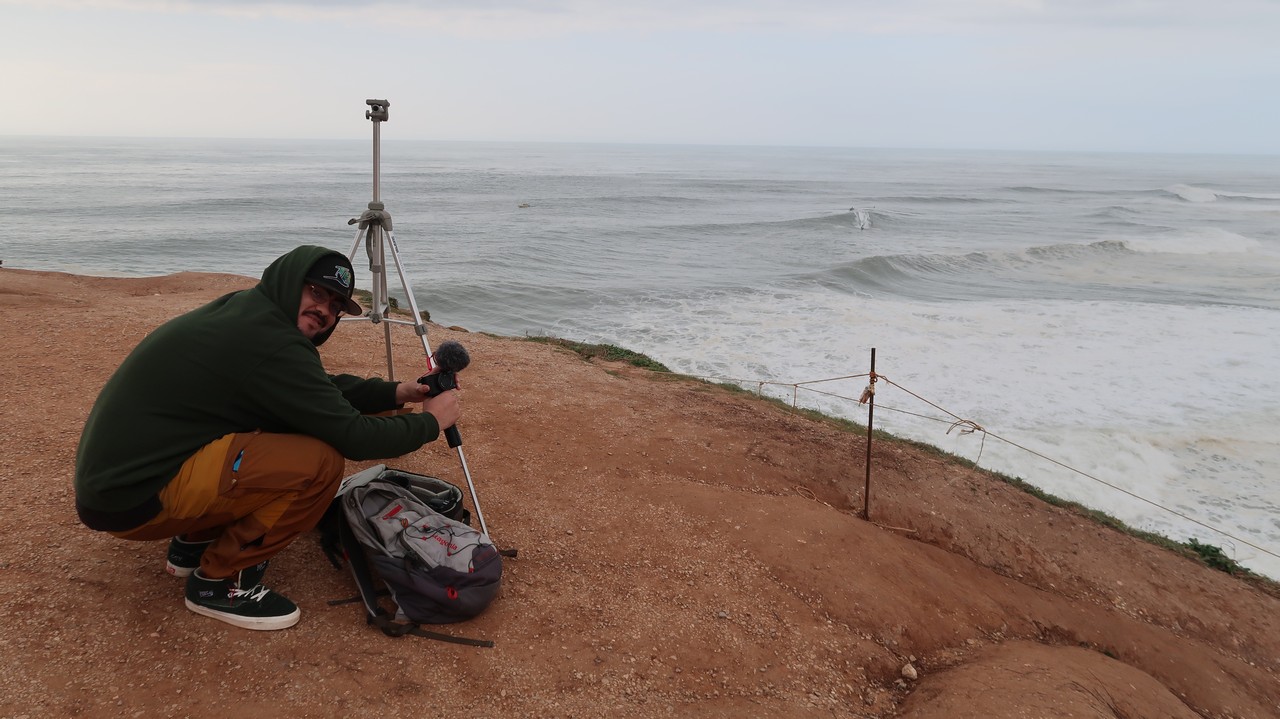 During the evening hours we analyzed all of the flight data together with Cotty and shared our experiences regarding the challenges and surprises from our first operations in huge Nazare. Ultimately, we concluded that the technology works better than expected, but our operational approach would need to be refined. For example, flying from the lighthouse is ideal because it is closer to the wave and the drone can be placed in the ideal location more easily. We also realized that we need to have spares of every piece of equipment when we travel! We noted a few revisions needed for the display functions too. All of our work and data collected in Nazare has helped to develop our data visualization portal where raw data can be instantly viewed as wave heights. We continue to make progress building on our foundation from Nazare to include better algorithms and flight sensitivity. 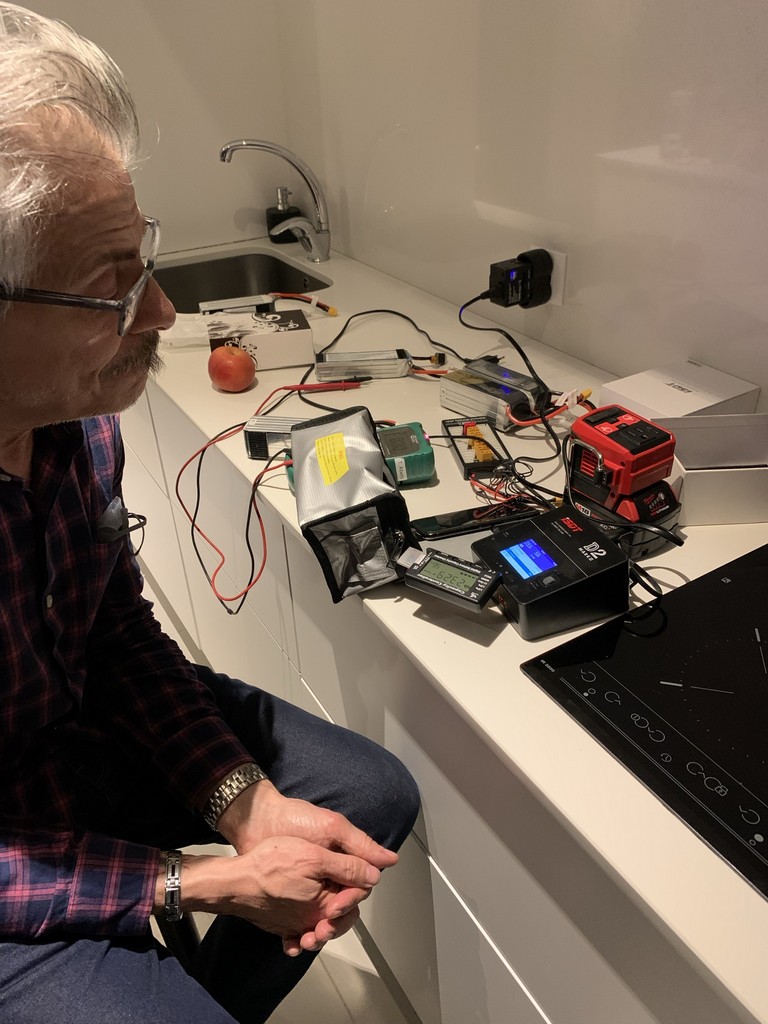 I can’t say enough positive things about the people we met with during our brief visit to Nazare. Everyone from our waiter to our COVID test nurse was extremely friendly and welcoming. A special gratitude is reserved for Joao Vidinha who allowed us to borrow his battery charger overnight so we could conduct additional measurements the following day. Not once did our group have a single bad experience while in Nazare. In fact, it was such a good experience that we plan to visit for an entire month next season to do additional XXL wave measurements hoping to objectively measure the next record setting wave. Until then, we plan to visit a wave pool to conduct a series of controlled marine based sensitivity tests. We have already conducted land based accuracy tests, which suggest 4-8cm accuracy. 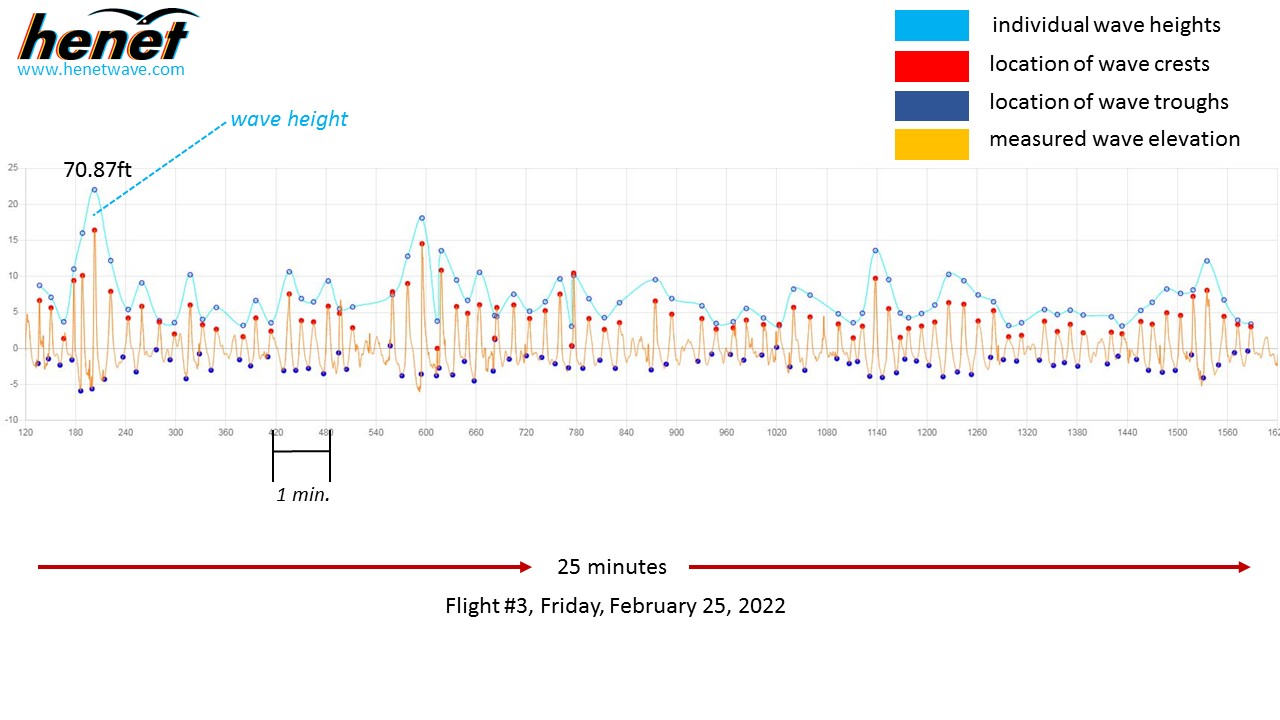 We are thrilled with the prospects of applying additional research and development in Nazare next season. Hopefully we’ll see you somewhere near the lighthouse the next time the waves go XXL. In the meantime you are welcome to keep up with us from our website (www.henetwave.com) or our Instagram page (@henetwave).