The North Atlantic is starting to produce a few low-pressure centers with the potential for big waves, however the position of these lows did not just yet directed big swells over Portugal Mainland West Coast. At the moment of the release of this article, the charts are indicating a low-pressure prone to trigger significative events.

On the 16th of October, Friday, charts are showing a low-pressure to the West of the British Isles moving towards a region to the North of the Azores Islands, the Western group will be the first to be affected and extending gradually to the rest of the Isles with big waves, strong winds and significant precipitation. 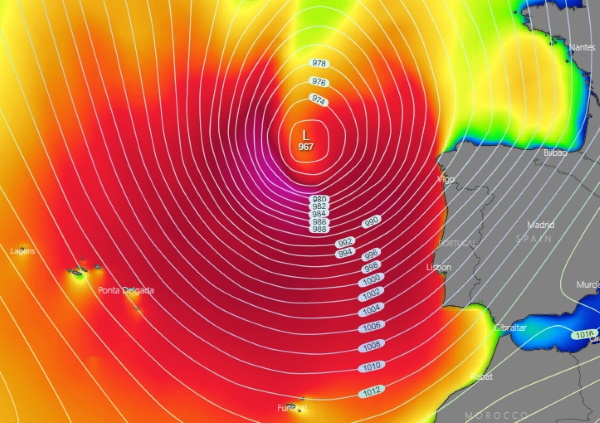 Further ahead this low-pressure gathers strength and moves East towards the Portuguese mainland West Coast and then veering North, producing a big swell event, although the position of this low will induce strong Southwest winds, resulting on big choppy seas under stormy conditions with sizes ranging 17’ to 20’+ (still premature sizes on models) as from Tuesday 20 of October, also expected heavy to moderate precipitation. Weather warning and nautical restricted are expected to be issued by the authorities.