A big storm is passing by Azores islands, and arrives at the Portugues coast this Thursday.

The forecasts indicates strong rain and strong wind, high sea bustling, with maximum waves up to 14 meters and a period of about 17 seconds. Seven districts are on red alert, including  Leiria,  Nazaré district.

The Sea and Atmosphere Institute believes that this storm may be similar to the srtong storm Hercules, which reached Portugal in 2014 and caused great damage to our coast. Storms like this only happen once or twice a year. 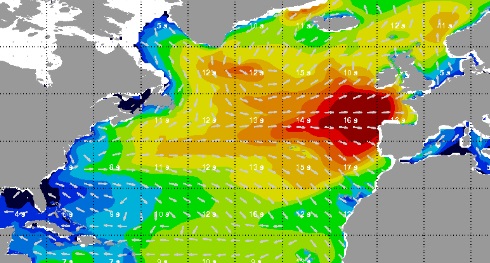 Despite the great swell, the sea and atmospheric conditions will not allow surfing in Praia do Norte. However, after the storm, probably Monday, conditions may be favorable to surfing. Although the forecast point to a low swell, the wind will be weak and the period may be around 13 seconds.

The National Authority of Civil Protection issued yesterday a warning to the population, suggesting some preventive measures such as: "take special care in the circulation near the coast, avoiding if possible the movement in these places; don’t engage in activities related to the sea, namely water sports and walks by the sea; be aware of meteorological information, Civil Protection and Security Forces indications. "

Stay tuned, following the forecasts of the windguru and the local webcam of Praia do Norte and the next posts. Click bellow to zoom photos from previous storms here at Nazaré, with a bit of surfing too.